From 2003 to 2006 to develop his photography series named Protokoll, Christian Lutz accompanies a member of the Swiss Federal Council on a number of official occasions throughout the world.

In Protokoll the photographer observes the mise-en-scène of authority within the hierarchies to which the political decision makers and their delegations are subjected.

He isolates the clichés that rule the world and records the unsaid and unobserved with his camera. His images show a reality that differs from the official photographic reports.

The power presented in these strictly codified rituals gives way only briefly through fleeting gestures. Christian Lutz delimits a context in which the activities of the ministers, their deputies, and the personnel that orbits this political cosmos unfold.

The photographs present a concentrated critique that calls into question a deeply ingrained system of representation causing the viewer to alternate between laughter and astonishment. 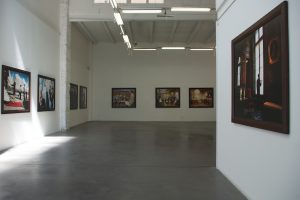