From 2003 to 2012 Christian Lutz’s primary focus is to create a trilogy on power.

The political component, Protokoll, was released in 2007 and in 2010 the photographer tackles economic power in Tropical Gift, a study on Nigeria’s oil and gas circles.

Religious power is meant to be his trilogy’s final component and in 2011, Christian Lutz contacts the International Christian Fellowship (ICF), a Zurich-based evangelical church. With the agreement of the Church’s leaders, he photographs the congregation and its followers over the span of a year.

In November 2012, the third volume, In Jesus’ Name, is published. A few days later, a lawyer, hired by the ICF and representing 21 followers, protagonists in the photographs, files a complaint and obtains an immediate ban on the book.

Christian Lutz reacts by revisiting the banned photographs and delivering new images blacked out with thick banners. It is now impossible to recognize the faces. And, as an expression of the prejudice, the text of the complaint filed by the plaintiffs is printed over this obliteration. Lutz draws upon the language of the press confronted to image rights in two ways: Eliminating the individual’s identity by covering up the eyes and printing the court decision on the photographs. Strangely, the images are neither shocking nor sensational, they merely reflect attitudes and slices of life.

From a work banned stems a new, even stronger one. His trilogy has since become a quadrilogy, moving onward to evoke the power of the judiciary.

In the urge to interpret images, one tends to project in them one’s own beliefs and doubts, and soon emerges the certainty to see in them what was feared.

exhibition to be produced on wall paper 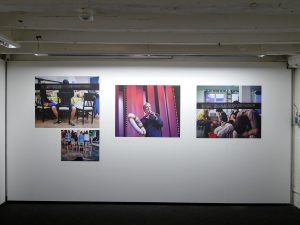